In my teens, New Zealand’s mountains were a frequent focus of the day-dreams that I sometimes used to escape the hum-drum of suburban life. This interest was fostered by tramping trips with school friends in the nearby Rimutaka and Tararua Ranges near Wellington where I grew up. Later I was to do several training weekends with the NZ Alpine Club, leading to high-country adventures in the mountains of Nelson and Canterbury, where we climbed a number of the less challenging peaks, particularly in the Travers Valley. While many of those trips were memorable, I ended up following a career that not only shifted me to the central North Island but also involved extended periods of field-work. This, coupled with a developing family, pushed high country adventures progressively out of reach and they largely disappeared out of my life for the next 30+ years. Only in the last decade have I revived my interest in exploring New Zealand’s back-country solely for the pleasure of being out there.

The idea of getting back up to higher elevations was prompted by a chance encounter at the Upper Caples Hut, where we shared a night with an Auckland doctor in his mid-sixties. While chatting over dinner, he talked with us of his rekindled interest in climbing, fostered initially through NZAC training courses, and which he was now extending to guided climbs on some of New Zealand’s great peaks. While the latter hold less appeal for me, my memories of previous trips above the snowline prompted me to ask “why not?”. Returning home, I dusted off my ice-axe and began dreaming again. And with family back from overseas, we decided that it was time for a trip to Tongariro National Park.

Fortunately a large high pressure system rolled in from the Tasman right in the window of time (early July) in which we were all free of other obligations. With quickly assembled gear we set off for National Park village, with at least two days of forecast clear weather. Our first morning dawned with a sharp frost, and after picking up a couple of hire ice-axes, we set off to climb Tongariro. The first part of this walk is along the famed Tongariro Alpine Crossing, probably New Zealand’s highest profile one-day walk. 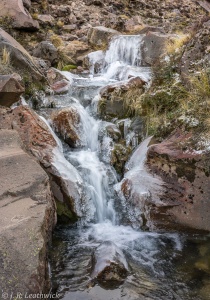 Ice along the Mangatepopo Stream

Although we had clear skies, the temperatures dropped steadily and the wind increased in strength as we climbed up the Mangatepopo Valley from the road-end. We encountered our first snow by the time we reached the saddle at the top of the Devil’s Staircase, where the temperature was close to zero – coupled with winds gusting close to 50-60 km/hr, the wind-chill temperatures were well below zero.  The wind increased further as we climbed up out of the South Crater, with spindrift blasting across more exposed parts of the track that leads to the ridge above the Red Crater. Although we saw two larger guided parties that were well equipped with ice-axes and crampons, others varied widely in their gear – we tried to discourage two young Chinese girls in running shoes from going on, using sign language to try and bridge the language gap, but they were insistent that they would carry on.

Having reached the high point of the crossing, we turned west on the track to the Tongariro summit, stopping for a bit of lunch and to refine the self-arrest skills of those not familiar with the basics of stopping a slide. The snow conditions were perfect for this – hard enough to get a good slide going on a moderate slope, but soft enough to easily drive in an axe head to come safely to a stop. Soon, younger (more athletic!) members of our party were vying for the most spectacular arrest, diving headlong, and spinning to a halt in a flurry of flying ice. 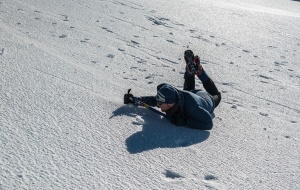 Final stages of a head-first self-arrest

Further up the track we found conditions more challenging, with a south-facing slope holding hard frozen snow. We were glad of our micro-spikes – mini crampons that provide much greater security than boots alone, although without quite the ability of full crampons to cope with extreme conditions. They gave a great sense of security as we carefully made our way up onto the high ridge that leads around to the summit, where we stopped briefly to admire the view.

Our descent from here was simple, sidling down the slope to the well defined ridge that leads off to the west above the Mangatepopo Stream, dropping down into the stream just above the Mangatepopo Hut, and rejoining the Tongariro Crossing track for the short walk back to the carpark. A great day walk, perhaps not with all the spectacle of the full Tongariro Crossing, but with much less foot traffic. And the expansive views out over the Mangatepopo Valley to Ngauruhoe and Ruapehu are magnificent, with Taranaki also visible in the distance.

Day two dawned overcast and cold with light drizzle, but the weather progressively brightened as we drove to the top of the Bruce Road, where we emerged above the cloud to find a bright sun shining out of the clear blue sky. Catching the new chairlift to a coffee at the Knoll Ridge Cafe, we again kitted up and headed off to climb up to the skyline lookout above the pinnacles on Pinnacle Ridge. This offers panoramic views over towards Ngauruhoe, Tongariro and the Tama Lakes, but getting there wasn’t going to work this time. Easy snow conditions lower down gradually gave way to harder and harder ice, with a thick wind-sculpted crust of frozen rain on the upper parts of the ridge. Full crampons would have been okay, but the micro-spikes just didn’t have the grip to proceed in safety, so we turned back and spent a relaxed hour enjoying the snow in the basin below.

Camera-wise I carried a cut-down kit on this trip – my A7RII camera body, two Loxias (21 and 35 mm) and the tiny Leica Elmarit-M 90. All were superb, and easy to focus manually when using the focus peaking of the Sony camera. I found myself mostly gravitating to the 35 mm, which has a field of view that seems to suit my way of seeing the world. The 21 mm is more challenging to use effectively, requiring a very ‘content-full’ scene to work well at landscape scales – and even here, two images stitched with the 35 mm will often work as well, provided that they are shot with care – preferably without a polarizer. When it comes to people shots the Elmarit-M is without peer – Leica really know how to pack maximum performance into a small package!

Climbing towards the lookout

Pausing to admire the view

1 thought on “Getting high again…”